Today I was made aware of a particularly poignant anniversary. It’s not what you might expect. It involves puppets. But stick with me.

Two years ago, the premiere Canadian cast of Avenue Q had their opening night at the Lower Ossington Theatre. By “their”, of course, I mean “our”. By some lucky turn of fate, I was cast as Kate Monster/Lucy the Slut.

I had auditioned with my friend’s Kermit the Frog puppet, which inspired some strong reactions when I made him sing “Special”. The musical director asked me to belt, and somehow I did. I had the most fun callback I’ve ever had. And, at the end, I got a dream role.

As I bounced onstage with our rented Kate Monster on my hand that night, I had no idea of what a game-changer Avenue Q would prove to be.

It blew up. I’ve never been in a show that successful. Reviews rolled in with exceptionally positive comments. The critics loved it. More importantly, the audiences loved it. That was my favourite part: catching glimpses of the audience, who had expressions of utter joy on their face. The show was extended for a handful of performances. I received my first ever paycheque for acting from Avenue Q. I experienced the trauma of putting away a puppet you’ve imbued with a character for the first time. Lucy was more fun to let loose with than Kate onstage, but when it was time to put Kate away, I realized how much of me was in her. It was really hard to put her in a New York-bound black box. 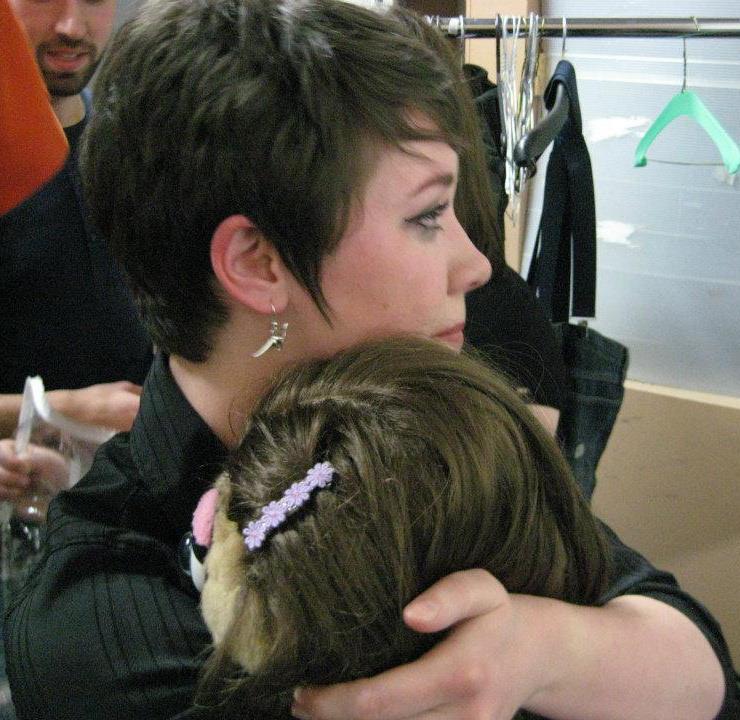 But it was far from the end. The LOT wanted to bring the show back in the summer. Obviously I was onboard. We got beautiful new puppets made by the incredible builder and puppeteer Andy Hayward. Forever in my mind, that Kate and that Lucy will be “my” Kate and Lucy.

The adventure continued beautifully. There were some changes to the cast as the show went through not just a second run, but a third as well. People recognized us on the street. One guy stopped on his bike to ask if I was Kate, and a group of guys stopped us at Pride to snap pictures. I had a full summer of acting work. It was thrilling.

My favourite thing was that we got more interactive with the audience. Lucy the Slut started coming out in the second act and flirting with the audience (a compendium of her top sluttery is posted on my other blog, but I am for sure going to move that post over here at some point). Nicky grabbed a few cell phones and credit cards from audience members during “The Money Song”. And the audience still applauded when we sang “Rob Ford! Is only for now!”

The show was so successful, the LOT decided to keep it going. In October 2012, after my third run with the show, I decided it was time to step away from my role and give someone else a shot. 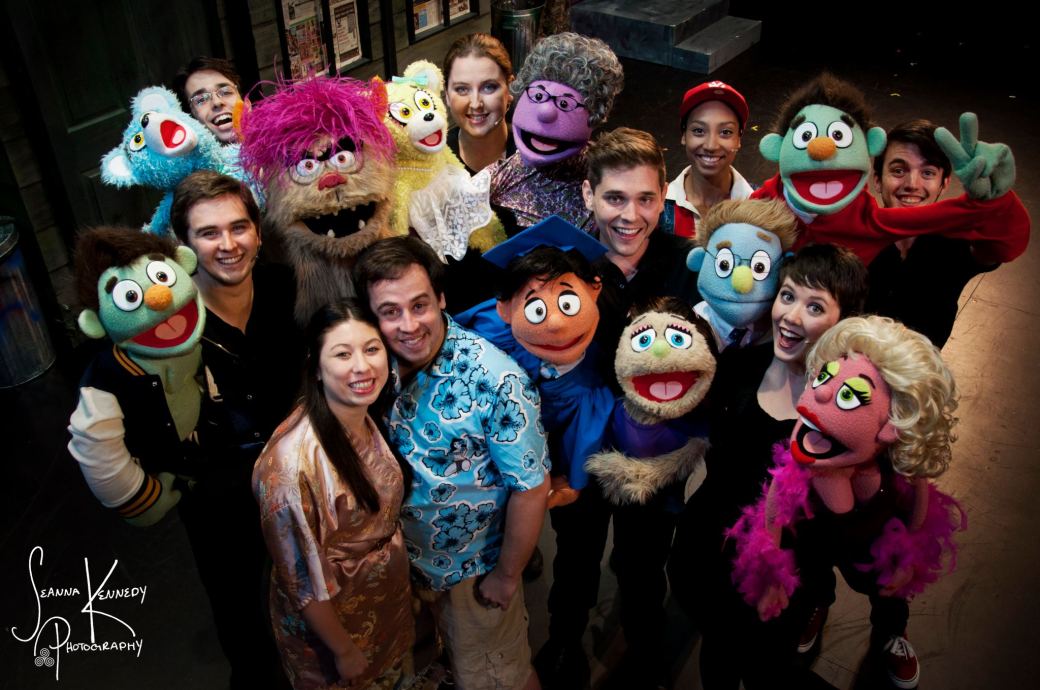 The show had been an unmatched experience. Through that show, I made so many great friends and colleagues with whom I have continued to work and commiserate on a regular basis. It connected me with the agency that now represents me. It introduced me to the wonderful world of puppetry, which has kept me working more than anything else. It helped me gain new confidence in my voice and acting abilities. Avenue Q got my picture in NOW Magazine, for pete’s sake.

Avenue Q basically kick-started my theatrical career in Toronto. I’m so grateful for that show.

And it’s still going. Today, it celebrates two years of its run at the Lower Ossington Theatre. I hear the current production is super. You should go.

Congratulations to the LOT, to all members of the cast past and present, to the stellar creative team (insane, INSANE props to Seanna Kennedy, director and swing extraordinaire), for the continued success of this wonderful show. I’m so proud.

And you know, under the felt, the swearing, and the sex, the number one lesson I managed to take away from the show was something simple, explained to a child in a brief Sesame-Street-style video:

“A purpose is a direction to your life. It could be a job, a family… it could be the pursuit of knowledge or wealth. Everybody’s purpose is different. The best thing about a purpose is that it gives your life meaning.”
“I want a purpose!”

I think, during my time on Avenue Q, I found my purpose. 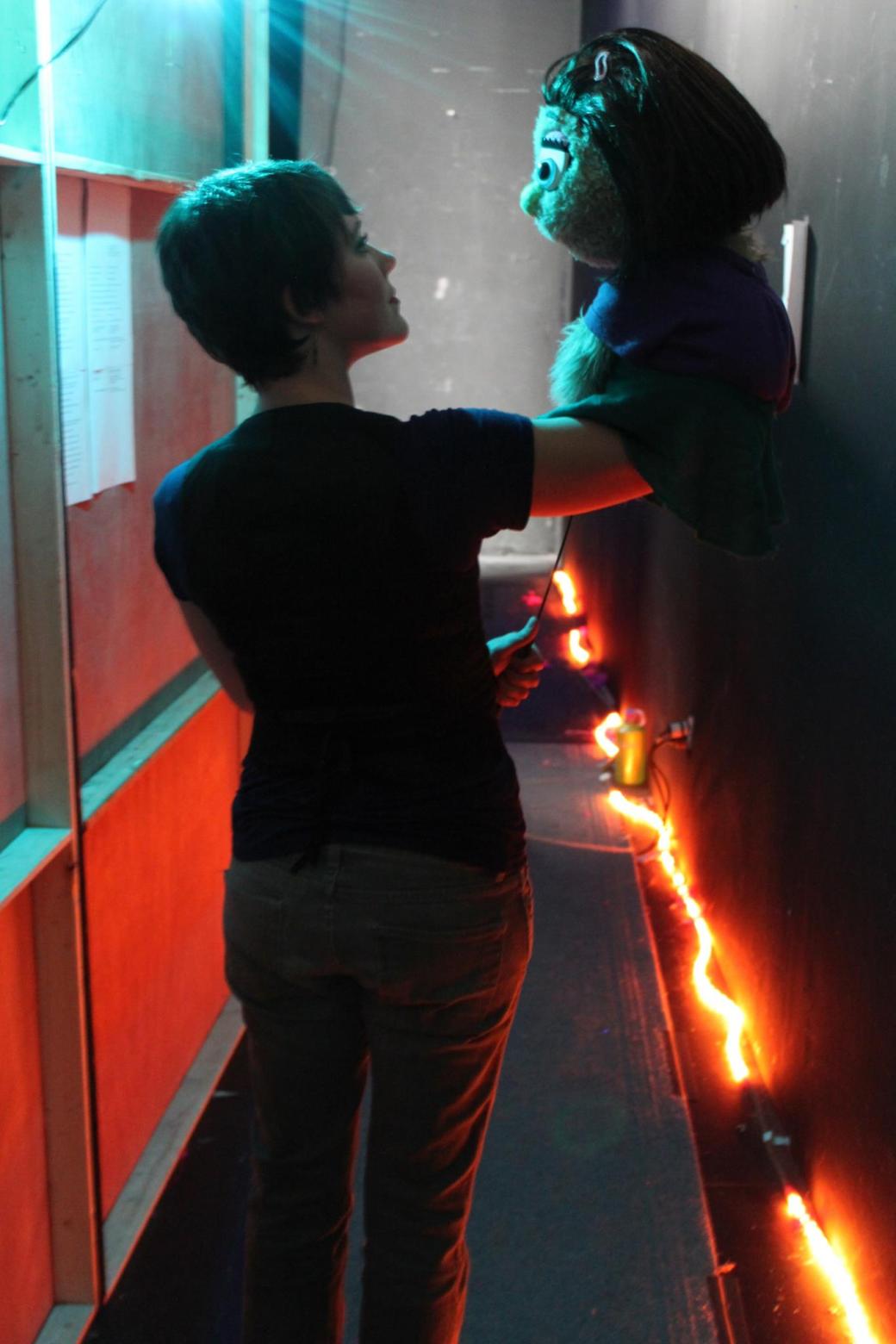 My last picture with Kate Monster, October 2012. Til we meet again. Oh, and we will.

Last night, Paleoncology had its first performance. It was a workshop performance in front of a small crowd of folks who braved a ridiculous amount of snow to come. I was going to write a post about the experience of preparing my first-ever solo show for a performance, and the show, but I’ve decided that is interesting to no one but me. So, instead, here are the top lessons I’m taking away from this experience thus far:

1. Breathe.
Should be simple, right? Nope. Easiest thing in the world to forget, and when your breath does, so does any emotional connection. This might be the single biggest block to creation and performance I know. So breathe.

2. Stop apologizing.
A lot of artists (particularly young Canadian artists) apologize compulsively, and it’s downright destructive. Whether it comes from humility or fear or what have you, I don’t know. I just know that I do it a lot. There was many a moment of “Sorry– No! I lied! Not apologizing!” in rehearsals. The more stress I had and the more worried  was about how “good” my work was, the more I apologized. Apologizing is not believing in your work, and if you don’t, who will?

3. Turn off the bullshit meter.
Christopher Weddell, my acting teacher at CCPA, once told me (okay, often told me) that I have a high bullshit meter– ie, I look at what I’m doing and say to myself, “This is bullshit.” But who does that help? Nobody. Literally no one is aided by that, particularly when you’re doing a run of a show with no one on stage but you and your brain gets in a feedback loop of “you are doing a terrible job” for forty minutes. So turn it off, stop watching yourself, and go.

4. A solo show is a lot of you.You wrote it, it’s your voice, it’s your body. You have to learn it all. You only have yourself to fall back on. And you will feel weird asking people to come and see you for an hour. And that is okay.

5. Why didn’t I just do the TJ Dawe or Sam Mullins thing and just tell a freaking story on a bare stage?
This is not so much a lesson as a question I asked myself as I schlepped a full backpack and rolling suitcase full of costumes and props through six inches of snow last night.

5. A solo show wrings you out in the best way possible.
This is going to be one weird analogy, but in S&M (see, great start), when submissives come out of a scene with a dominant partner they often have some kind of positive cathartic release, like crying or laughing. If me lying in bed after the show last night feeling warm fuzzies and wanting to sob is any indication, there can be some parallels drawn. After the anticipation, excitement, and nerves leading up to this performance, it is gratifying as hell to know that it has been seen, and heard, and hopefully enjoyed. Draining and exhausting, but oh man is it rewarding.

6. A solo show, while a lot of you onstage, is certainly not a one-person endeavour.
Lots of people helped get the show to where it currently is, and they have my thanks. Adam Proulx was my writing buddy from day one and helped keep me motivated and writing, and offered his thoughts and opinions. Michelle Urbano and Shayne Monaghan read the script aloud for me at Monday Night of New Works (if you have a new piece, bring it there!), and Michelle also was front-of-house for the workshop. Allan Turner shared his incomparable knowledge of dinosaurs with me. Lynn Elkin, Tom Hall, and Heidi Quicke all contributed financially (which, trust me, is a huge help). And the people who came last night to watch and share their thoughts are now firmly lodged in my heart.
Chris Murray loaned his voice to the project as Daniel, and Ryan Couldrey did all the prerecorded speech segments for us, and I’m thrilled that I got to spend a day at CBC hanging with these guys and adding a crucial element to the show.
Most of all, though, I’ve been extremely lucky to have Andrew Young with me on this journey. I first asked him to act as the dramaturg for Paleoncology, and he’s since taken on the task of directing this beast. Beyond those huge tasks, he’s helped with the costumes, let us rehearse in his house, helped coordinate time-and-space management, run sound, and more, and overall dedicated so much of his time and energy to this project that it flabbergasts me. He’s been a wonderful collaborator, and as far as I’m concerned, Paleoncology is our show. If one person gets the bulk of my gratitude, it is him. Thank you.

7. When you’re creating, it can always be better.
Paleoncology is still just a baby of a play. It has more growing to do. I’m always aware of that. I certainly don’t want to workshop it to death, but when it head to Fringes in Montreal and Calgary next year, I want to bring something fantastic. I’m ready to dive into the feedback forms from last night and start polishing. And when we coordinate some more performances in Toronto in the new year, I’m hoping that we’ll see you there, and that we’ll blow your mind.

8. Tell the story.
Because underneath everything else– costumes, puppets, sets– that’s all it is. A story waiting to be told. 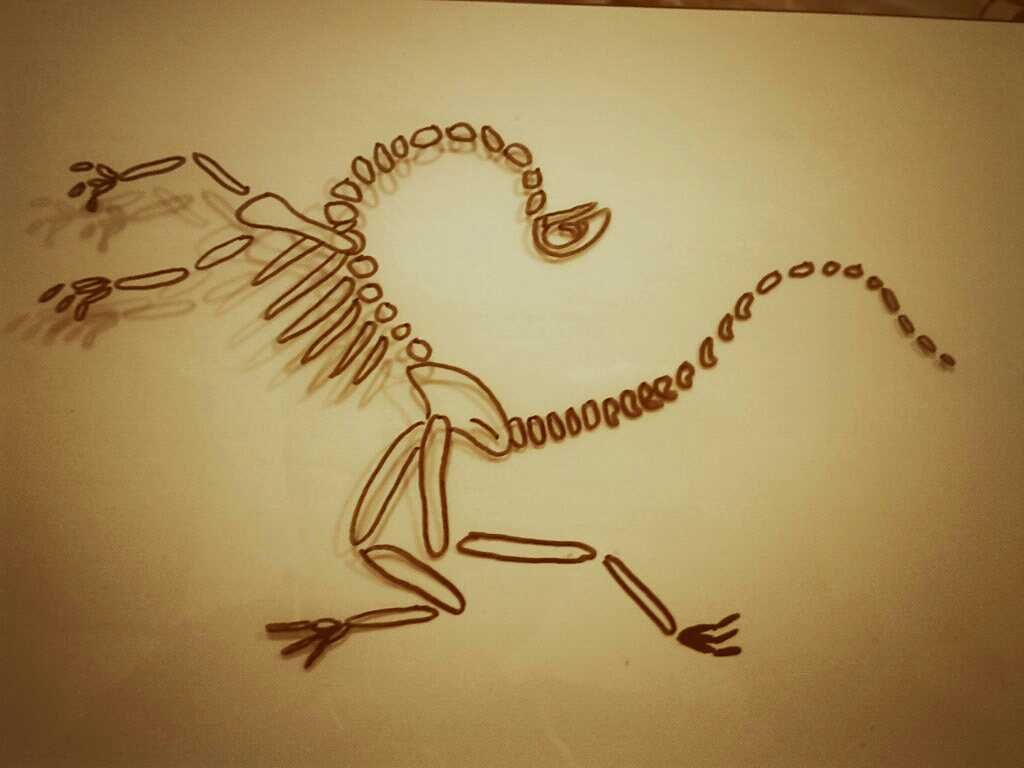 Sometimes I think I want to get into slam poetry.

Then I realize I just want to scream my feelings at a crowd of people for a while.

Despite initial impressions, I’m coming to understand that these are, perhaps, not the same thing.

First appeared on my Facebook four years ago. Revitalized by watching a lot of Button Poetry.